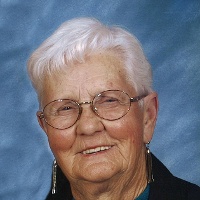 Vivian Laurella Strande was born on January 28, 1929 near Northwood to Peter and Gina (Erickson) Sorlien. She was baptised and confirmed in the Lutheran faith. She attended school near Hatton, ND. She was married to Melvin Strande on December 1, 1945 at Northwood. Vivian was a very helpful farm wife, and also worked at the bakery in Northwood for her brother-in-law and at a grocery store.

Melvin and Vivian moved to Wyoming in 1973 as Melvin was employed as a carpenter there. They lived in several cities throughout this time. In 1986 they purchased a farmstead near Kinnear, Wyoming and lived there until returning to Northwood in 2008. They enjoyed many winter months in McAllen, Texas and later in Desert Hot Springs, California. Upon returning to Northwood, Vivian was a much appreciated volunteer for the Chapel and the Sunday Services at Northwood Deaconess Health Center.

Preceding her in death were her parents, husband Melvin on April 30, 2016, son Jerry on July 26, 2019. She was also preceded in death by brothers, Martin, Gilbert, Nordeen, Vergil and Russell and sisters, Pearl, Eleanore, Hazel, Esther, Leona, and Ruth.

Swarstad Chapel
To order memorial trees or send flowers to the family in memory of Vivian Strande, please visit our flower store.