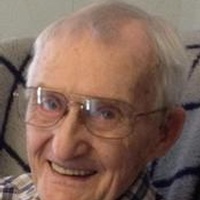 Thor Lonne was born October 18, 1910, in Garfield Township, Traill County, ND the son of Sever and Kaia (Koldingnes) Lonne. He was baptized and confirmed at St. John Lutheran Church in Hatton and attended rural school until eighth grade. Thor served in the United States Army and was a lifetime farmer. On October 9, 1948, he married Hadie Marjorie Thykeson at Hatton.

He is survived by his wife of 64 years, Hadie of Hatton; son, Stanley Lonne of Hatton; daughter, Marjory (Neil) Roberts of Cleveland, OH; grandchildren: Matthew, Heather, and Andrea; sister, Ruth Kensrud of Portland, ND; and several nieces and nephews.

To order memorial trees or send flowers to the family in memory of Thor J. Lonne, please visit our flower store.