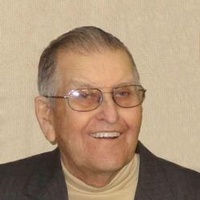 Theodore, "Ted" Ostenson Jr was born January 13, 1926 on a farm near Sharon, ND to Theodore Sr. and Olive (Hagen) Ostenson. He attended country school in Westfield Township until 8th grade. Ted then began helping on the farm. He enjoyed hunting and trapping as a younger man.
On October 5th, 1952, Ted married Rose Mary Smaaladen of Aneta, ND at the Sundahl Lutheran Church in Aneta. From this union, three children were born: Debra, Diane and Todd.

Hobbies that Ted enjoyed was cleaning grain to get ready for the local grain show. He also continued to hunt deer and took his kids out to show them how to cut and process the animal. Another hobby was going to auction sales with his kids. Now, his kids find auction sales fun to go to. One of the most fun and family orientated was playing whist or pinochle, which he taught or tried to teach his kids. As he grew older, it was his grandkids and great-grandkids that meant the world to him.

Preceding him in death were his parents, sisters: Glady, Thelma, Alice and Verna.
May you rest in peace. Now and Forever. Amen.

To order memorial trees or send flowers to the family in memory of Theodore Ostenson Jr., please visit our flower store.