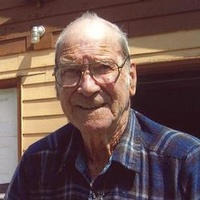 Sidney Maurice Sotvik was born August 10, 1920 in Rugh Township of Nelson County to Sigurd and Marie (Norjord) Sotvik, one of six children. He farmed and raised cattle and sheep with his dad until 1950 when he took over the farm. On June 10, 1951, Sidney married Margaret D. Haugo. They lived on the farm and raised three children. In 1977, Sidney and Margaret moved to Aneta. He was a member of Logan Church, later Sundahl Lutheran Church. Sidney loved hunting, fishing, trapping and skinning, walking, and cutting wood. He was proud to be a life member of the NRA.

Preceding him in death were his parents, one brother and two sisters.

To order memorial trees or send flowers to the family in memory of Sidney Sotvik, please visit our flower store.