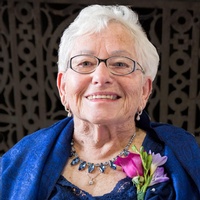 Shirley Naismith, 87, of Northwood, ND and formerly of Grand Forks, ND passed away peacefully surrounded by her three daughters on Sunday, May 20, 2018 at Northwood Deaconess Health Center in Northwood. Funeral services will be held Monday, June 4, 2018 at 10:00 a.m. at Hope Evangelical Covenant Church in Grand Forks, ND. A visitation will be held Sunday, June 3, 2018 from 5:30 to 6:30 p.m. with a family service at 6:30 p.m. at Community Bible Church in Northwood.

Shirley Rose Drake was born on May 16, 1931 to Clara (Matthews) and Herbert H. Drake, outside of Petersburg, ND. She married Donald Naismith on January 28, 1953 and was married until his death in 2014.

Shirley graduated from Lakota High School in 1949. She attended Jamestown State College for two years and then transferred to the University of North Dakota where she earned a B.S. in Chemistry and a B.S. in Home Economics. She served UND from 1969 -1985; first as Associate Registrar, then Registrar and finally Director of Records in 1972. She was the official scorekeeper for UND womenâ€™s basketball for 20 years.

Shirley was a wonderful mother and role model for her three daughters encouraging them to pursue their dreams. She taught by example, as a leader in her family, church and community. She accepted the Lord, Jesus Christ as her personal savior during a revival in college. She was an incredibly giving individual who served as a hospice volunteer for more than 25 years, delivered Meals on Wheels and twice received the J.C. Penney Golden Rule Award. Shirley had a wide variety of indoor and outdoor interests and loved to share what she knew with her family, including cooking, hosting beautiful dinners, sewing, quilting, baseball, kayaking, downhill skiing, basketball, and entertaining. She also loved to hunt, and earned a varsity letter in Riflery at UND. Shirleyâ€™s best friend for many years has been Susie Shaft. Together, they skied, sailed, catered, camped and biked all the while laughing and teasing. Susie made Shirley smile for many years through to her last days.

To order memorial trees or send flowers to the family in memory of Shirley Naismith, please visit our flower store.