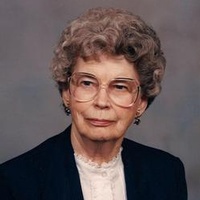 Selma (Sally) Smaaland was born November 25, 1916 in Rugh Township, rural Aneta, ND, the daughter of the late Henry and Marie (Hogie) Smaaland. She attended school and grew to womanhood in the Aneta community.
Selma worked as a telephone operator and as a clerk at various department stores until her marriage to Melvin Severinson on September 29, 1946. They were life-long farmers in Oberon, ND and also foster parents to 23 children over the years. They adopted their son, Ray, in 1966.

They retired in 1970 and moved to Aneta in 1987. Melvin passed away October 1, 1992. Selma continued to live at home until her move to Aneta Parkview in 2007. She was a member of the Sundahl Lutheran Church in Aneta.

She is survived by her son, Ray (Karla) Severinson, Devils Lake, ND; sister-in-law, Birdie Smaaland; and many nieces and nephews.

Sally will be greatly missed by all who knew and loved her.

To order memorial trees or send flowers to the family in memory of Selma Severinson, please visit our flower store.