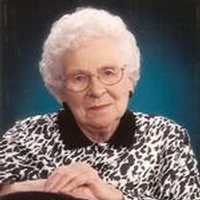 Funeral Services will be 10:30 am, Wednesday, June 30, 2010 at Ascension Lutheran Church in Emerado with burial in the Northwood City Cemetery in Northwood.

Visitation will be at the Bilden Funeral Home on Tuesday from 5:00 pm until 7:00 pm with a 7:00 pm Prayer Service and one hour prior to services.

Ruth E. Nubgaard was born September 20, 1920 at Logan Center, North Dakota the daughter of Ellef and Ragnild (Sorbon) Nubgaard. Ruth grew to womanhood in the Logan Center area and was baptized at Bethel Lutheran Church rural Larimore and attended Logan Center School. She was a member of Logan Lutheran Church of rural Aneta where she was confirmed. Ruth was united in marriage to Edward Joseph Carroll at Bock, Minnesota and to this union six sons, Eddie, LeRoy, Eugene, Dennis, Gary and Jerome were born. Ruth and Edward farmed for five years near Foley, Minnesota and then moved to the Logan Center area where they farmed for many years. After Edward died in 1960 and Ruth continued the farming operation until 1988 when she retired at the age of 67. She then moved to Emerado where she has continued to make her home.

Ruth, Edward and family were members of Ebenezer Lutheran Church in Northwood for many years where she was active in their Ladies Aid. She later became a member of Ascension Lutheran Church in Emerado which is now part of the Turtle River Ministry.

Ruth is survived by her sons, LeRoy (Carol) Carroll of Northwood and Gary Carroll of Emerado; daughter-in-laws, Mavis Carroll and Sherry Carroll both of rural Northwood; eleven Grandchildren and twenty great grandchildren and several nieces and nephews.
She was preceded in death by her parents; husband, Edward; sons, Eddie, Eugene, Dennis and Jerome; sisters, Selma and Lenora; brothers, Nelvin, Oscar and Edin and daughter-in-law, Kay (Mrs. Eugene) Carroll.

To order memorial trees or send flowers to the family in memory of Ruth E. Carroll, please visit our flower store.