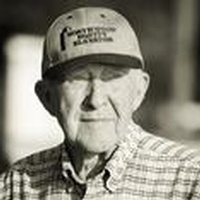 Philip Korsmo, 90, of Northwod, ND, Christ' humble servant, passed away on January 25, 2012 at the Northwood Deaconess Health Center, Northwood, ND.
Philip Gordon Korsmo was born just South of Northwood on July 22, 1921 to George and Evelyn (Bilden) Korsmo. He was baptized and confirmed his Christian faith at Ebenezer Lutheran Free Church in Northwood. During World War II, he enlisted in the Signal Corps to serve his country. Before deployment, he received a medical discharge. He farmed all his life in the Northwood area and was still driving a tractor at the age of 87. A bachelor until the age of 49, he married Borghild Nordbo on March 6, 1971 and together they raised a son, Mark, on the farm where Philip grew up. They moved into Northwood in 1997. In September of 2010, he moved to the Northwood Deaconess Health Center.
He is survived by his son Mark (Debbie) Korsmo, Northwood, ND, and three grandsons, Tyess, Rayne, and Bennett Korsmo, and one granddaughter, Siri Korsmo, all of Northwood, one brother Paul (Florence) Korsmo, Fargo, ND, sisters-in-law, Edith Korsmo, Mayville, ND, Artha Travers, Grafton, ND, brothers-in-law, David (Lois) Smith, Grand Forks, ND, Olaf Nordbo, Northwood ND, and Marvin (Ardelle) Nordbo, Fargo, ND, many nieces, nephews, cousins, and friends. He was preceded in death by his wife, Borghild, on November 8, 1999, his brother Rueben Korsmo, sister, Korinne Smith, brother-in-law Willis Travers and sister-in-law Yvonne Nordbo.
Visitation from 5-7pm on Friday, January 27, 2012 with a prayer service at 7pm at Bilden Funeral Home, Northwood, ND
Funeral Service at 2pm, on Saturday, January 28, 2012 at Ebenezer Free Lutheran Church, Northwood, ND.

To order memorial trees or send flowers to the family in memory of Phillip Korsmo, please visit our flower store.