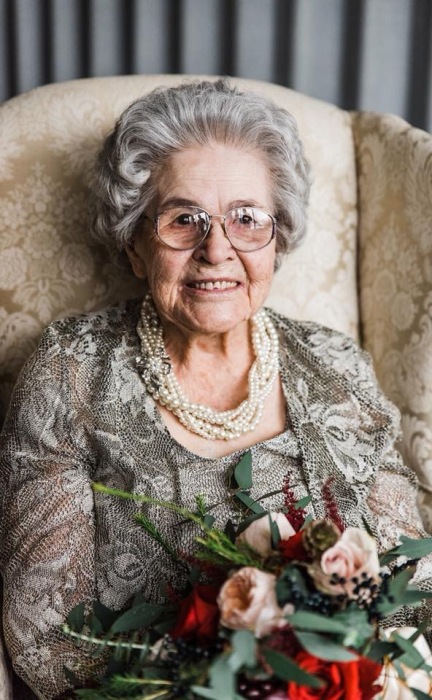 Pauline was born on March 2, 1916 to Herman and Anna (Ackerman) Berthold in Reynold, ND. She grew up in the Reynolds area being the oldest of four siblings. Some of her most cherished memories were of her bothers and extended family gathering together most weekends and attending the rural polka dances. She and her family farmed using horse drawn equipment which led to her love for riding horses throughout her younger years. Raised speaking only German, she carried her strong heritage by making traditional German meals like dampfnudel, potato dumplings and sauerkraut.

Pauline graduated from Hatton High School in 1934 and proudly played on the girls HS basketball team as a Hatton Flyer. Growing up in the tough years she showed true grit even giving her time to drive the horse-drawn sleigh school bus in the bitter cold North Dakota winters after she graduated. She also faced crippling rheumatoid arthritis in both hands throughout her late teens and twenties.

She married Knute Sletten on June 17, 1946 at St. Stephen’s Catholic Church in Larimore, ND. They resided in a few rural homes throughout the years and finally established in her dream home east of Northwood. Together they had four sons and she was dedicated to the Catholic faith throughout her life.

Pauline milked cows and worked at the Harvester Lounge in Northwood for more than 25 years after being widowed in 1970. She worked for numerous farmers helping with potato harvests in the fall. She was a passionate seamstress, sewing and doing alterations for many people throughout the area. She made numerous intricate wedding and bridesmaid gowns for both family members and others along with making doll clothes to dish towels and everything in between.

She enjoyed tending to her many beautiful flower beds and garden where she would be seen with her hands in the dirt by many passersby on the highway. She also was an avid baker, canner and jelly maker and enjoyed watching NBA and western shows. She went on many traveling adventures with her longtime companion Lyle Ellingson and other family members.  Most weekends you could count on her to be playing Smear or Rummy and sipping brandy with friends.

Pauline had a soft spot for orange tabby cats who always found the name “Max”. She had many grandchildren sleepovers and made them all feel loved in many ways including baking individual mini Funfetti cakes and eating ice cream in the evenings.

She was a woman with agriculture close to her heart, always asking on the progress of field work and how the crops were doing. She lived in her home until the ripe age of 96 and could be seen still push mowing her lawn not long before then. Her beautiful life will be celebrated by all who knew her.

To order memorial trees or send flowers to the family in memory of Pauline Sletten, please visit our flower store.