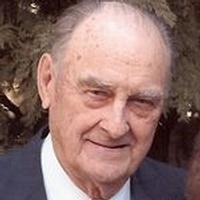 Parnell was born February 2, 1917, to Bennie and Ida Uglem on their farm in Loretta Township, North Dakota. He was the second oldest child, and oldest son. He received his 8th grade diploma at Loretta Central country school. His younger brothers all served in the military while he remained at home where he was needed on the farm.

On October 10, 1943, he married Marion Viola Funseth. They made their home at the Uglem home farm until they purchased their home one-half mile away, where they farmed until 1977. At that time he retired and they moved into Northwood. Their home became THE stopping place for many relatives, especially for the grandkids when they stayed after school for evening activities. Their home remained the center of activities until the tornado of 2007 forced them out of their home. They stayed with Don and Karen at their home for a short time before moving into Northwood Deaconess Health Center.

Parnell was a lifelong member of West Union Lutheran Church. He served as a Loretta Township Supervisor and was a Western Grand Forks County Soil Conservation District Board Member for many years. He also sold insurance for Wally Mutual Insurance.

He is preceded in death by his parents, his wife Marion, brothers Raymond, Berthold, and Phil, and sister Bernice Bilden.

The Bilden Funeral Home in Northwood is assisting the family with arrangements.

To order memorial trees or send flowers to the family in memory of Parnell Uglem, please visit our flower store.