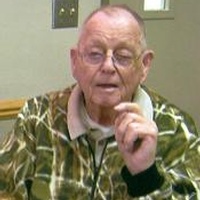 Orville P. Voll, 92, of Hatton, North Dakota died Saturday, April 30, 2001 at the Hatton Prairie Village in Hatton where he has resided for the last three years.

Funeral Services will be 1:00 pm, Friday, May 6, 2011 at the Hatton Prairie Village Chapel in Hatton with burial in St. John Lutheran Cemetery in Hatton.


Orville P. Voll was born July 19th, 1918 in rural Hatton, North Dakota the son of Henry and Ida (Tveten) Voll. He was raised there and attended school in Hatton. On July 20th, 1941 he was united in marriage to Vern Onstad. To this union their son, Dennis was born. He then entered the U.S. Army during World War II and was sent to England where he was assigned as a military driver. Upon his return to the United States he continued as a military driver until his discharge. He then worked the United States Postal Service in North Dakota and then in California where they lived for many years. In 1985 they returned to Hatton where they have since made their home.

Ovrille was a member of St. John Lutheran Church of Hatton and the Hatton American Legion Post.
He later took flying lessons and became a pilot which he enjoyed along with traveling.

The Bilden Funeral Home of Hatton, North Dakota is assisting the family with arrangements.

To order memorial trees or send flowers to the family in memory of Orville P. Voll, please visit our flower store.