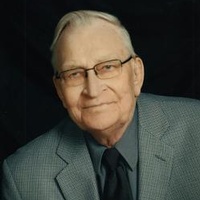 Orville was born May 12, 1925, in Logan Center Township, Grand Forks County, ND, the son of Henry and Olga (Jacobson) Hagen. He grew up and attended school at Logan Center. He began farming at an early age.
Farming was his lifelong pride along with his family. When it came to farm machinery, he could fix anything. Friends and neighbors would often come by and ask his advice on that and many other things.

He married Sybil Sampson in July of 1946. With Sybil, they had six children: Lonnie, Tim, Lana, Robbie, Terry, and Annette.
After Sybil's passing, he was united in marriage to Jean Griffin Hensrud in February of 1970.

With the marriage to Jean, the family grew to include three more children: David, Debbie, and Darcey. Together they enjoyed 46 years of marriage, a blended family of nine children, 19 grandchildren, and 33 great-grandchildren.

He was preceded in death by his parents, siblings: Allen, Parnell, Mildred, Gladyce, and Adeline; Also preceding him in death was his first wife, Sybil; son, Tim; granddaughters, Angela and Robin; and grandson, Brian. He is survived by his brother, Raymond; wife, Jean; eight children, grandchildren and great-grandchildren.

To order memorial trees or send flowers to the family in memory of Orville Hagen, please visit our flower store.