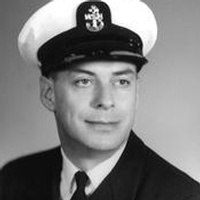 Norris Holman, 90, of Hatton, ND passed away Friday, June 28, 2013, at Hatton Prairie Village, where he has resided for the past six weeks. Funeral services will be held Monday, July 1, 2013, at 10:30 a.m. at Beaver Creek Lutheran Church, rural Hatton. Visitation will be held Sunday, June 30th from 5:00 p.m. to 7:00 p.m. with a 7:00 p.m. prayer service at Hatton Prairie Village. Burial will be held in the Beaver Creek Lutheran Cemetery.
Norris was born March 1, 1923, in Beaver Creek Township of Steele County to Clifford and Julia (Bjerke) Holman. He grew up in the Hatton area and graduated from Hatton High School in 1941. From 1943 to 1946, he served in the Merchant Marines. In 1948, he enlisted in the U.S. Navy and in 1971 started service with the Navy Fleet Reserve. He was a Senior Chief Petty Officer and served during World War II, Korean Conflict, and the Vietnam War. In 1981, he was honorably discharged from the U.S. Navy. After his retirement from the service he spent his summers in Hatton and winters in Las Vegas and California. He enjoyed dancing, bowling, and traveling.
Survivors include his sisters: Eleanore Vigen, Hatton, Jeanette Foss, Bismarck, ND, Merle Mehus, Hatton; several nieces and nephews; and several great nieces and nephews.
Preceding him in death were his parents; and brothers, Orville and Tennes.

To order memorial trees or send flowers to the family in memory of Norris Holman, please visit our flower store.