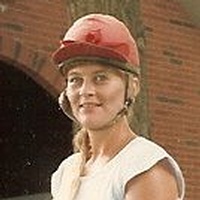 Nancy Margit Thompson was born August 29, 1956 in Northwood, North Dakota the daughter of Nels and Ruth (Mutchler) Thompson. She was raised in Northwood and graduated from Northwood High School. She then attended the University of North Dakota for a short time before receiving her Equestrian Degree from Colorado Northwestern Community College in Glenwood Springs, Colorado. Nancy then moved to the Ocala, Florida area where she worked on Thorough Breed Farms for many years and later as a Veterinary Assistant.
Nancy was Baptized and Confirmed at Northwood Evangelical Church in Northwood. One of her greatest passions in life was working with and riding horses.

To order memorial trees or send flowers to the family in memory of Nancy M. Thompson, please visit our flower store.