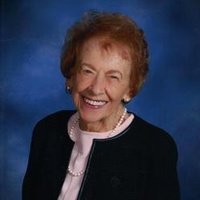 Mona was born March 14, 1924 in Northwood, North Dakota, the first child of Dagny Helena (nee Skurdell) and Oliver Edwin Bilden. She was baptized and confirmed in the Lutheran faith.

After graduating from Northwood High School in 1942, she attended St. Olaf College in Northfield, Minnesota, and graduated in 1946 with a bachelor's degree in home economics. She continued her education at the University of Minnesota and became a Registered Dietitian. In 1948 she married Elmer (Bud) Hjortland, Jr. and to this union David Joseph was born in 1950. Bud contracted polio while a senior at Luther Seminary and died in 1951, leaving Mona a widow at age 27.

Following Bud's death, Mona worked at Bethlehem Lutheran Church in Minneapolis as Director of Visitation. In 1953 she married Calvin Elwood Berg, a Lutheran minister. To this union, Jonathon Henry was born in 1954, and Rachel Ann in 1957. The family lived in Boyd, Minnesota, and St. James, Minnesota, where Calvin served as pastor. In 1968 the family moved to Sioux Falls, South Dakota where Calvin served as a Regional Director for the Good Samaritan Society. Mona was employed there by McKennan Hospital as a Registered Dietitian. In 1970 Calvin died of a heart attack, leaving Mona widowed a second time at age 46.

In June of 1972 Mona married Herbert Arthur Lund, a widower and banker from Albert Lea, Minnesota. She moved to Albert Lea and she and Herb adopted each other's children. Herb and his late wife, Evelyn, had three children; Richard Eric (1952), Barbara Ruth (1954), and Marie Elizabeth (1958). The two families merged harmoniously, and family gatherings often included the extended families of each of Mona's husbands as well as Herb's first wife.

Mona worked as a Registered Dietitian for many years, concluding her career with the South East Minnesota Citizens Action Council, working with its congregate dining program for seniors throughout southeastern Minnesota. She was a member of the American Dietetic Association for 69 years. Mona and Herb traveled extensively and enjoyed spending many winter months in Sun City, Arizona, where they were associate members of the American Lutheran Church of Sun City. Herb died in December of 2004. In 2008, Mona moved back to her birth hometown of Northwood.

Mona's foremost values included love for her family and her faith in God, which was steadfast despite being widowed three times. Mona was a life-long member of the ELCA and involved with different groups in the church. She was very active in PEO and in Sons of Norway. She loved entertaining and family gatherings, the family's Norwegian heritage, travel, and watching her favorite sports teams on television. All who knew her admired her positive outlook and cheerful disposition. Her life serves as an example to her children and all who knew her well.

Her family and friends miss her and look forward to seeing her again in heaven.

To order memorial trees or send flowers to the family in memory of Mona Lund, please visit our flower store.