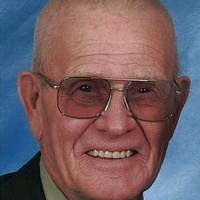 Melvin Strande, 91, of Northwood, ND passed away Saturday, April 30, 2016 at Northwood Deaconess Health Center, surrounded by his family. Funeral services will be held Thursday, May 5, 2016 at 1:00 p.m. at the Swarstad Chapel of Northwood Deaconess Health Center in Northwood. A visitation will be held Wednesday, May 4, 2016 from 5:00 to 7:00 p.m. with a 7:00 p.m. prayer service at the Bilden Funeral Home in Northwood.

Melvin Jacob Strande was born September 25, 1924 near Sharon, ND to Ivar and Thea (Struckness) Strande. He attended school in Northwood. On December 1, 1945, Melvin married Vivian Sorlien. He farmed and also worked as a carpenter with the Thingelstad brothers and the Ostlie brothers of Northwood. Melvin then joined the carpenters union and worked at the Grand Forks Air Force Base and the missle site at Nekoma, ND. Melvin and Vivian moved to Wyoming in 1973, where he continued with carpentry construction until retiring in 1986. Melvin enjoyed fishing, golfing, and wintering in Desert Hot Springs, CA for a number of years.

Preceding him in death were his parents, brothers, Nels and Iver and sister, Gerda Strande.

To order memorial trees or send flowers to the family in memory of Melvin Strande, please visit our flower store.