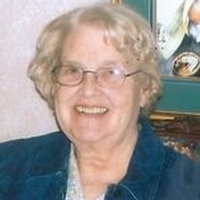 Funeral Services will be 11:00 am, Monday, May 3, 2010 at the Northwood Evangelical Lutheran Church with burial in the Northwood City Cemetery.

Mary Jane Pietron was born April 7, 1927 in Larimore, North Dakota the daughter of Matthew and Alice (Evenson) Pietron. She was baptized and confirmed in the Larimore Catholic Church. She was raised on a farm near Larimore where she attended eight years of public school in a small rural school in Kempton, North Dakota. At the age of fourteen she moved with her family to Northwood where she attended high school and they joined Northwood Lutheran Church.
After high school Mary worked in a Northwood doctor's office and later in the ladies ready to wear store. She married her high school sweetheart, Curtis Hegg, on August 20th, 1950 in the Ebenezer Lutheran Church in Northwood. They lived in Mayville, North Dakota for two year before Curtis entered the U.S. Air Force at Kessler, Mississippi. Curtis then began a thirty-three year career with John Deere and they lived in Minneapolis, Minnesota, Milbank, South Dakota, Minot, North Dakota, Omaha, Nebraska before retiring to Atlanta, Georgia.
Mary Jane was a member of Christ the King Lutheran Church of Alpharetta, Georgia.

She is survived by her husband, Curtis; sons, Terrance of Atlanta, Georgia and Richard (Faye) and their children, Brandon and Jackie of Woodbury, Minnesota; daughter, Kathryn (Jarrell) Johnson and their children, Andrew and Alexis of Alpharetta, Georgia; brothers-in-law, Myron (Hazel) Hegg of Northwood, North Dakota and Wallace (Maxine) Hegg of Vergas, Minnesota and sister-in-law, Ione (Robert) Mutchler of Fargo, North Dakota.
She was preceded in death by her parents and an infant son, Dwight.

To order memorial trees or send flowers to the family in memory of Mary Jane Hegg, please visit our flower store.