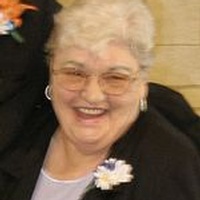 Funeral Services will be 10:30 am, Monday, October 4, 2010 at Valley Free Lutheran Church in Portland. Burial will be 2:00 pm, Monday in Little Norway Lutheran Cemetery in Fertile, Minnesota.

Visitation will be one hour prior to services in the church.

Marlys Adora Rongen was born March 1, 1935 at home in Garfield Township, Polk County near Fertile, Minnesota the daughter of Arthur and Hilma (Gredvig) Rongen. She was baptized and confirmed at Little Norway Lutheran Church of rural Fertile. Marlys grew up on the farm attending Lone Oak School #65 and graduating from Fertile Public High School in 1952. She then attended New York Hairdressing Beauty Academy in Fargo in 1954 and then worked at Brown's Beauty Shop in Mayville for three years. On November 24, 1955 she was united in marriage to Howard J. Lee. They made their home in Portland where she owned and operated Marlee's Beauty Shop from 1958 until 2006.
She was a member of Valley Free Lutheran Church in Portland.

Marlys enjoyed genealogy and put together four family histories of her and her husband's families.

The Bilden Funeral Home of Hatton is assisting the family with arrangements.

To order memorial trees or send flowers to the family in memory of Marlys Lee, please visit our flower store.