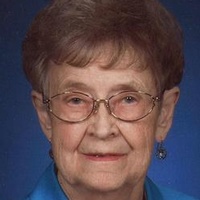 Mabel was born September 23, 1920, the youngest child of Carl William and Olga Hanson on their farm east of Hatton, ND. She was baptized and confirmed at St. John Lutheran Church in Hatton. On June 9, 1939, Mabel married Palmer Bjerke at St. John parsonage. They were married almost 54 years.

Mabel worked on the family farm, at Strandeâ€™s Bakery, operated the lunch counter at the bowling alley in Northwood and worked at the Northwood Post Office until retirement.

Mabel was an active member of Washington Lutheran Church, WELCA, and Eastern Star. She enjoyed time with family and friends, playing bridge, watching birds, planting flowers, and spending winters in Texas and Arizona.

Preceding her in death was her husband Palmer, parents, brother Walter, sister Phyllis, and grandson Steven.

To order memorial trees or send flowers to the family in memory of Mabel Bjerke, please visit our flower store.