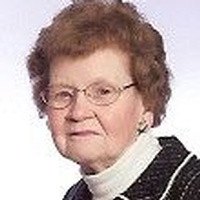 Funeral Services will be 11:00 am, Saturday, April 17, 2010 at the Northwood Evangelical Lutheran Church in Northwood with burial in Northwood City Cemetery.

Visitation will be on Friday at the Bilden Funeral Home from 5:00 pm until 7:00 pm with a 7:00 pm Prayer Service and one hour prior to services in the church.

Kathleen Staflin was born October 16, 1911 at Maxbass, North Dakota the daughter of Louis and Gena (Amundson) Staflin. At the age of three she moved with her family to Loretta Township near Northwood. She attended country school in Loretta Township and was confirmed at West Union Lutheran Church. In December of 1936 she was united in marriage to Theodore Thorstenson and they made their home in Northwood. Theodore died on December 25, 1991 and she continued to make her home in Northwood until February of 2007 when she moved to the Northwood Deaconess Health Center.
She was an active member of the Northwood Evangelical Lutheran Church and their WELCA and the Northwood Senior Citizens. Over the years Kate and Theodore did extensive traveling in their motor home alone and also with the Good Sam Club.

Memorials may be directed to the Northwood Evangelical Lutheran Church or Northwood Deaconess Health Center.

To order memorial trees or send flowers to the family in memory of Kathleen Thorstenson, please visit our flower store.