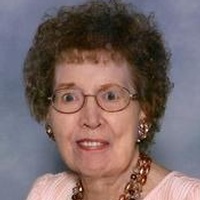 Kathleen Nell Lupcho, 95, of Northwood, ND passed away at the Northwood Deaconess Health Center on April 2, 2012.
Kathleen was born September 17, 1916 to Oscar and Hilda (Morkve) Oswald at Lisbon, ND. She was baptized at the Free Methodist Church, Lisbon, ND on November 2, 1916 and was confirmed at Ebenezer Lutheran Church, Northwood, ND on November 2, 1930. In 1934, Kathleen graduated from Northwood High School. In 1938, she graduated from Augsburg College in Minneapolis, MN, where she obtained her teaching degree and was a member of the Augsburg College Concert Choir for four years.
Kathleen taught in Northwood, western ND, Kemmerer, WY and Odgen, UT. On June 11, 1944, she married George Lupcho in Girard, KS, where George was serving in the U.S. Army. They made their home in Odgen, UT and following her husband's death in 1990, Kathleen moved back to Northwood. She entered the Northwood Deaconess Health Center on December 19, 2011.
Preceding her in death were her parents, her husband George and son Lance. Kathleen is survived by grandsons: Jason and Bryan, Otis Orchards, WA, and Cody of Roy, UT; great-grandson Noah of Otis Orchards, and several cousins.

Funeral services will be held Thursday, April 5, 2012 at 10:30am at Ebenezer Free Lutheran Church in Northwood, ND.

To order memorial trees or send flowers to the family in memory of Kathleen Lupcho, please visit our flower store.