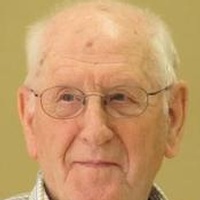 Joe was born in Westfield Township on October 24, 1920 to John A. and Emma (Overby) Amundson. In his last days, he reminisced about his boyhood farm life including the family's horses Queen and Polly that pulled the family's sleigh in winter. Joe joined the Civilian Conservation Corps at 16 and was stationed in the Black Hills. In 1942, he joined the US Navy and was aboard the USS Ticonderoga during World War II.
In 1944, Joe married Betty June Heid in Washington, DC. They moved to Sharon in 1950 and there, Joe worked for 17 years at Jensen's Standard Station and then served as the custodian for Sharon Public Schools for 14 years. Joe enjoyed gardening, fishing, attending church, and was a faithful fan of high school basketball games. He was a member of the American Legion Post #169 in Sharon for 61 years and served on the Sharon City Council for many years.
Joe was preceded in death by his wife, Betty Jo, his parents, and all of his twelve siblings: Myrtle, Arthur, Hazel, Abner, Morris, Sophie, Elsie, Viola, Rueben, Henry, Gordon, and Adeline. His children are Sharon (Jerry) Johnson of Fergus Falls, MN; Tom (Jane) Amundson of Sharon; John (Laura) Amundson of Bloomington, MN; and Susan (Martin) Amundson of Homer, AK. Grandchildren are Amanda and Bart Amundson, and Taryn Sveet and great grandchildren Savannah and Shea.
Joseph Emory Amundson of Sharon, ND peacefully passed on January 28, 2012 surrounded by his family.
Clergy: Rev. Don Swenson
Music: Donna Smith, Organist and Taryn Sveet, Soloist
Casket Bearers: Amanda Amundson, Bart Amundson, David Jensen, Dennis Lund, Perry Ostmo, Jerry Rosnow, Stephen Sveet, and Taryn Sveet

To order memorial trees or send flowers to the family in memory of Joseph Amundson, please visit our flower store.