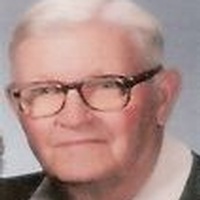 Visitation will be on Wednesday at the Bilden Funeral Home in Northwood from 5:00 pm until 7:00 pm with a 7:00 pm Prayer Service and one hour prior to services in the church.

Iver Ernest Groth was born February 22, 1918 in Steele County, North Dakota the son of Clarence and Selma (Thompson) Groth. He was raised there and attended school in Enger Township. On March 5, 1940 he was united in marriage to Margaret Bjerke in Hatton, North Dakota. They lived in California where Iver worked at Douglas Aircraft during World War II. After the war they returned to North Dakota to farm in Steele County. After retiring from farming in 1980 they spent their winters in Arizona and summers on the farm.
Iver was a member of Hovfa Lutheran Church of rural Finely, North Dakota until it closed and has since attended Little Forks Lutheran Church of rural Hatton.

The Bilden Funeral Home, Northwood is in charge of arrangements.

To order memorial trees or send flowers to the family in memory of Iver Groth, please visit our flower store.