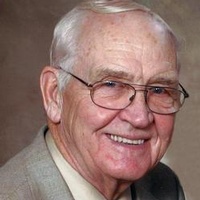 Ingvald L. Berdal, 87, of Bismarck, ND, passed away Saturday, April 16, 2016 at Luther Memorial Homes in Mayville, ND surrounded by his family. Funeral services will be held Wednesday, April 20, 2016 at 11:00 am at Community Bible Church in Northwood. A visitation will be held Tuesday, April 19, 2016 from 5:00 to 7:00 pm with a 7:00 pm prayer service at the church. Memorials can be sent to Gideons International, ALFBS - Luther Berdal Scholarship, Steer Inc., the Northwood South Cemetery, or a charity of your choice.

Ingvald Berdal was born May 9, 1928 in near Dahlen, ND to Lars and Carrie (Frederickson) Berdal. He attended school in Dahlen, ND and Dunwoody Institute in Minneapolis, MN. Ingvald served in the Army National Guard from January 11, 1951 to May 10, 1953. On June 27, 1953, he married Valborg Korsmo at Ebenezer Lutheran Church in Northwood, ND. Ingvald farmed with his brothers near Dahlen. Ingvald and Vallie moved to Cooperstown, ND and he worked for Reiten Mfg. In 1978, they moved to Bismarck, ND and worked for Melroe Mfg until his retirement in 1991.

Ingvald was a member and was on the board of Calvary Free Lutheran Church in Bismarck, a member of the Gideons and a volunteer fireman. He was also on the board of directors for Red Willow Bible Camp and Lake Region Vocational School. He enjoyed woodworking and gardening.

To order memorial trees or send flowers to the family in memory of Ingvald Berdal, please visit our flower store.