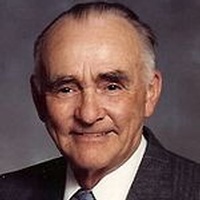 Henry was born on August 18th, 1915 in rural Larimore, ND to Joseph and Inga (Field) Olson. Henry married Emma Jean Cooper on July 22, 1940 in Crookston, MN. The couple made their home in rural Reynolds farming until retirement. For 22 years, Henry and Emma Jean spent the winters in Mission, TX. They moved to Grand Forks in 2003. Henry's wife Emma Jean passed away on June 22, 2004. Henry moved to Hatton Prairie Village in December 2007.

Henry was known for sharing his faith with others including being a Sunday school teacher, camp counselor and friend. He was a member at Holmes United Methodist Church. Henry loved spending time with his family and will be missed by all.

Visitation will take place from 6 PM to 7 PM on Tuesday, December 22, 2009 with a 7 PM prayer service all at Hatton Prairie Village in Hatton.

Funeral Services will take place December 23, 2009 at 10:30 AM at Holmes United Methodist Church, rural Reynold, North Dakota. Visitation will also take place for one hour before the time of the services at the church.

To order memorial trees or send flowers to the family in memory of Henry Olson, please visit our flower store.