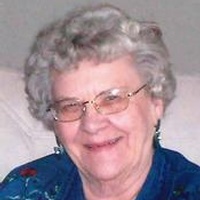 Florence Klabo, 85, of Fargo, North Dakota, died Saturday, April 6, 2013, at Rosewood on Broadway, Fargo under the care of Hospice of the Red River Valley. Funeral services will be held Friday, April 12, 2013 at 2:00pm at Trinity Lutheran Church in Sharon, ND. A visitation will be held two hours prior to the time of the service.

Florence Lillian Uglem was born to Ben and Ida (Skurdell) Uglem in Northwood on December 7, 1927. She was the youngest of seven children raised in Loretta Township, rural Northwood, ND. She was an active member of the West Union Lutheran Church community, attended Loretta Central country school and graduated from Northwood High School in 1945. She graduated from the Interstate Business College in 1946.

On October 1, 1949, she married Ardell Klabo at West Union Lutheran Church, rural Northwood. They farmed for many years by Sharon, ND, where they raised two sons and two daughters. She made a loving home on the farm and dedicated her entire life to her family.

Florence was a member of Trinity Lutheran Church, Sharon, and active in the Trinity Lutheran WELCA, where she shared her love of music with church choir and women's singing groups. She was also a member of the American Legion Auxiliary and the Birthday Club. She played piano well into her 70s, never having taken a lesson.

She relished life on the farm: she grew a large garden that included lush raspberries which she shared readily. Florence loved cooking for her large and often extended family. During harvest she cooked multi-course meals, loaded them up in the trunk of the car, and drove right onto the field so the men could eat without leaving the field. Dessert was always included. She moved to Fargo in 1992, and to Rosewood on Broadway in April 2012.

The best days of Florence's life were the days she could be with her children, grandchildren, and great-grandchildren. She spent many hours caring for her loved ones and was tireless in her devotion to her them. There was nothing she would not do for her family. Florence was a patient and kind soul with a generous heart. She was a special person who cared for many, young and old, in her 85 years. We will miss her loving presence in our lives.

Preceding her in death were her six brothers and sisters: Bernice Bilden, Berthold Uglem, Ray Uglem and Parnell Uglem all of Northwood, Phillip Uglem of Grand Forks, and Adeline Leslie of Fargo.

To order memorial trees or send flowers to the family in memory of Florence Klabo, please visit our flower store.