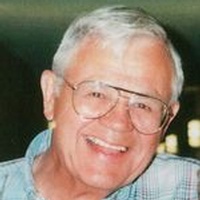 Funeral Services will be 2:00 pm, Monday, April 27, 2009 at St. John Lutheran Church in Hatton with burial in St. John Cemetery.

Visitation will be at the Bilden Funeral Home on Sunday from 5:00 pm until 7:00 pm with a 7:00 pm Prayer Service and one hour prior to services in the church.

Elner Monson was born December 19, 1925 in Hatton, North Dakota the son of Martin and Mina (Offerdahl) Monson. He was raised there and graduated from Hatton High School in 1943. In 1943 he entered the U.S. army and was honorably discharged in 1945. He then entered Aakers Business College and after graduating worked in Devils Lake and Williston, North Dakota. On January 1, 1954 he was united in marriage to Luverne Wastvedt. They lived in Williston for 6 years during which time Elner worked for Reep Motor Company. He then attended teacher's college in Valley City where he received a Bachelors of Science degree. After teaching 6th grade for two years in Valley City they moved to Belcourt where he was a teacher, a guidance counselor and finally served as Elementary principal for sixteen years. After retiring as a principal they moved to Newburg in 1985 where he became superintendent of three school districts, Kramer, Maxbass, and Newburg retiring in 1991. After retiring they moved to their home on Lake Metigoshe. In 1997 they sold their home at Lake Metigoshe and moved back to their home town of Hatton where he and Luverne spent their summers and winters in Mesa, Arizona. Elner passed away while visiting his daughter and family in Baxter, Tennessee.

The Bilden Funeral Home of Hatton is assisting the family with arrangements.

To order memorial trees or send flowers to the family in memory of Elner C. Monson, please visit our flower store.