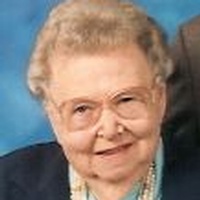 Funeral Services will be 11:00 am, Wednesday, May 5, 2010 at Beaver Creek Lutheran Church of rural Northwood with burial in Bethania Cemetery.

Visition Tuesday at the Bilden Funeral Home from 5:00 pm until 7:00 pm with a 7:00 pm Prayer Service and one hour prior to services in the church.

Ellen Gladys (Tosterud) Ostlie was born September 3, 1920 at Beaver Creek Township, Steele County, North Dakota, the daughter of Elmer and Gunda (Sanda) Tosterud. She was baptized and confirmed in the Norwegian language at Goose River Lutheran Church.
Ellen was married to Clifford Ostlie on April 18, 1946 at Crookston, MN. The log home where Clifford was born became their first home and in 1953 they built their new home. They farmed in Lind Township until "officially" retiring in 1977 but continued to live and work on the farm. Clifford died July 8, 1997. Ellen entered Northwood Deaconess Health Center on March 24, 2006 and passed peacefully on to the Lord on Friday, April 30, 2010.

Throughout her life, Ellen enjoyed her collections of pens, salt and pepper shakers, tea cups, and more. She liked all animals but it was cats that caught her fancy. But she loved her children, grandchildren and great-grandchildren even more.

To order memorial trees or send flowers to the family in memory of Ellen Ostlie, please visit our flower store.