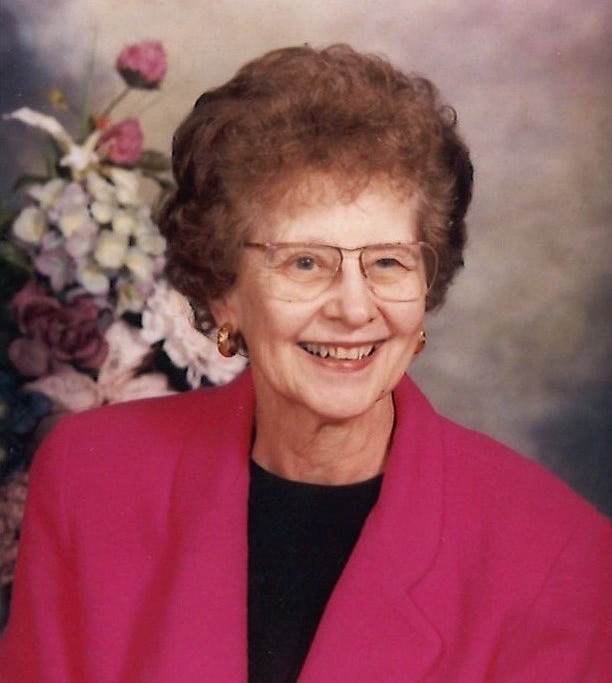 Delphine Draxton, 94, of Northwood, ND passed away Monday, June 27, 2022, at Aneta Parkview Health Center in Aneta, ND. Funeral services will be held Friday, July 1, 2022, at 1:30 p.m. at Ebenezer Free Lutheran Church in Northwood. A visitation will be held from 12:30 p.m. until the time of the service at the church.

The war was over when she had graduated as an RN. She came to Northwood to live with her aunt and uncle and began working at the Northwood Deaconess Hospital.

In March 1951, she married Howard Draxton. The couple made their home west of Northwood, where they farmed. They had three children Jane, Michael, and Robert. Michael died in 1977. In 1988, the couple moved to Northwood, where Howard died in 1991 after a 5-year battle with cancer. Delphine used her experience as a nurse, her perseverance, and self-giving nature to care for Howard. Small, but very strong, is a description of Del that was appropriate for many of the situations she encountered.

Delphine pursued her creative interests. She had a love for writing. She wrote poems, plays, and histories for many ladies aid, nursing home, and community events, often reciting from memory what she had written. She wrote and worked on the Northwood Centennial Pageant. She spent many years writing for the Northwood Gleaner, highlighting countless local people and their activities, always with Del's positive attitude woven into the article. She had a weekly column in the Gleaner, "Dakota Breeze".

Painting was a hobby of Del's. Many "Bob Ross" painting shows were watched. She once made a vacation of visiting her sister while attending a Bob Ross masterclass near Washington, DC. In true Del fashion, she used her new skills to teach many local elementary students to paint the classic "mountain scene". Any grandchild or their friend that entered Grandma D's house was encouraged to draw a horse or a person, with much praise being given for whatever was drawn.

Through all of this, her faith in Jesus was most important of all. Wearing out a couple of One-Year Bibles, she would always want to discuss what she had read that day. She loved Bible history and archeology.

In 2013, Del moved back to the farm. There in her apartment on the farm she enjoyed the beauty of flowers in the garden.  She continued to be an encouragement and joy to anyone who visited her, making you feel like you were the most important person in the room.

In January 2021, Delphine became a resident of Aneta Parkview Health Center. She passed away there Monday, June 27.

Preceding her in death was her husband, Howard; son, Mike; great-granddaughter, Hattie Hebl; and sisters, Ruth Grote and Francis Quiggle;

To order memorial trees or send flowers to the family in memory of Delphine Draxton, please visit our flower store.