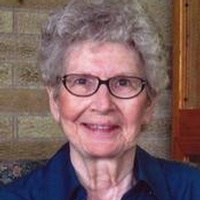 Delores Kjar, 80, of Aneta, ND passed away Satruday, January 4th, 2013 at Northwood Deaconess Health Center in Northwood. Funeral services will be held Friday, January 10, 2013 at 1:00pm at Sundahl Lutheran Church in Aneta. A visitation will be held from 11:00am until the time of the service at the church.
Delores Odegard was born April 3, 1933 to Anton and Eleanor Odegard in Milnor, ND. She married Adolph Kjar on December 21, 1952 in Milnor. They lived in Wahpeton, Kindred, and Valley City before making Aneta their home. They had the family store for many years and she later worked at the Aneta nursing home as their activities director. She really enjoyed her time there. Delores was a member of the Sundahl Lutheran Church and was active in many groups through the years.
Delores will be missed by her sons: Jonathon (Beverly), Aneta, ND and Mitchel (Amy), Milnor, ND; 5 grandchildren, 5 great-grandchildren; sisters: Luanna (Dale) Torreson, Milnor, ND and Gayle Dick, Riverside, IA; brothers: Sherman (Helen), Alamo, CA and Gene (Joann), Roseville, MN; sister-in-laws: Yvonne Anderson, Starbuck, MN and Edyth Odegard, Cottage Grove, MN; She is also survived by several nieces and nephews.
Preceding Delores in death were her parents, husband Adolph, brothers Duwaye and Donavon, and brother-in-law Kurt Dick.

To order memorial trees or send flowers to the family in memory of Delores Kjar, please visit our flower store.