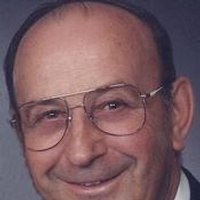 David G. Bommersbach , 83, of Northwood, ND passed away Wednesday, February 8, 2012 at the Northwood Deaconess Health Center. A memorial service will be held Sunday, February 12, 2012 at 2 p.m. at the Ebenezer Lutheran Church Northwood. Burial will be held in the Northwood Cemetery.
David G. Bommersbach was born on October 10, 1928, in Hankinson, ND, the son of Anton and Katherine (Roth) Bommersbach. In 1945, he moved with his parents to Larimore, ND, where he graduated from high school. In 1950, he married Geraldine Sherva and they had two children Michael and Scott. In 1976, Michael was killed in an auto accident. David was employed at Olso Supply until 1952, when he joined the US Army and served in the Korean Conflict. After the war, David was employed at the Northwood Grain and Hatchery, later was employed by Baseview Petroleum until he retired in 1990.
David was a son, brother, husband, father, grandfather, uncle, soldier and a person who was truly a gift to so many. He was diagnosed with Parkinson's which overtime gradually limited what he could do, but he never lost his sense of humor, how he related and treated people, and his sense of giving to others. David was very proud of his military service and his family. David most enjoyed the time spent with his family and especially his grandchildren in building memories that will last a lifetime. Whether it was building tree forts in the park, driving the golf cart, fishing, bowling, going to the arcade, watching sports or having caramel rolls at grandma and grandpa's. The best times for David were those spent with his grandchildren.
Survivors include his wife of 62 years, Geraldine; son, Scott (Holly) Bommersbach; grandchildren, Tanner, Shelby, and Bryce Bommersbach; brothers, Jerry (Donna) and Ron (Carol) Bommersbach; sisters, Irene, Cathy, and Delores.
Preceding him in death were his son, Mike; parents; sisters, Lil, Chris, Marion, and Cecilia; brothers, Edward, Anton, and Donald.

To order memorial trees or send flowers to the family in memory of David Bommersbach, please visit our flower store.