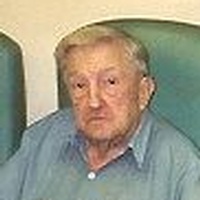 Funeral services will be 2:30 pm, Saturday, March 28, 2009 at the Goose River Lutheran Church of rural Hatton with burial in Goose River Cemetery.

Visitation will be on Friday at the Bilden Funeral Home in Hatton from 4:00 pm until 6:00 pm and one hour prior to services at the church.

Charles E. Beck was born February 5, 1930 in Newberg Township, rural Hatton, North Dakota the son of Louis and Evelyn (Olson) Beck. He was raised there and attended country school. He then served in the U.S. Army during the Korean Conflict. During the war Charles was wounded in battle and upon his discharge returned to Hatton where he made his home. Over the years he worked construction for many years until his retirement. For the last four years he has resided at the North Dakota Veterans Home in Lisbon.
He was a member of Goose River Lutheran Church where he was very active over the years.
Charles had a very artistic gift and loved to draw. He also enjoyed spending time with his family.

The Bilden Funeral Home of Hatton, North Dakota is assisting the family with arrangements.

To order memorial trees or send flowers to the family in memory of Charles E. Beck, please visit our flower store.