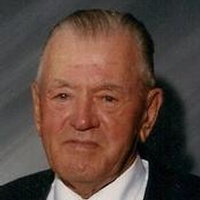 Carl Joseph Larsgaard, 91, Aneta, ND passed away on June 24th following a courageous 4-year battle with cancer. He died at Northwood Deaconess Health Center with family at his side. Carl was born May 26th, 1921 at his parent's home located on the farm Northeast of Aneta. He was the ninth of ten children, born to Hans and Gyda (Solberg) Larsgaard. Carl was baptized and confirmed at the Logan Lutheran Church. He grew up on the family farm and graduated from Logan Center consolidated school. Carl attended Wahpeton State School of Science where in March of 1941 a representative from the Glenn L. Martin aircraft factory in Baltimore, Maryland came looking for workers. At that time, in support of the war effort, he went to work building airplanes. He continued there until March of 1945, when he returned to help on the family farm. That fall, Carl went to Los Angeles to work for Douglas Aircraft. In spring he again returned to help farm. Carl took over the farming operation from his father in 1949.

Carl always enjoyed dancing. During a dance at the Aneta pavilion, he met the love of his life Florence Kueber. They were married on June 9th, 1948 at the Sacred Heart Catholic church in Aneta. In 1950, they started a new farmstead where they lived for 62 wonderful years. Here they raised their four children and enjoyed frequent visits from grandchildren. The farmstead also became home to many relatives when they returned to visit the area.

Carl was an active member of the community. He was on the Logan school board until it closed, the Logan township board, the Good Samaritan board of Aneta, and was a 4-H leader for five years. He and his wife were members of the Sons of Norway (Petersburg ND) and the Elks Lodge (Grand Forks ND). They also were members of Northwood's Parent Teachers Association. In 1963, Carl Larsgaard's farm was chosen for the Western Grand Forks County Soil Conservation award. One of the activities he enjoyed the most was working at the Northwood Museum. Carl dedicated forty-five years to the museum, first as a worker and later as the curator.

After his retirement from farming in 1989, he continued to enjoy farm life by watching the crops grow. He and his wife took many evening drives ending with supper at a favorite cafÃ©.

The loves of his life include his wife, children, grandchildren, family, friends, farming (especially swathing), visiting at local establishments (Northwood Flower Shop and Aneta Cenex), attending auction sales, working in his shop (especially in later years), craft welding and his dog Pepper. In June 2008 Carl and Florence celebrated their 60th anniversary. This was a highlight of their life as they celebrated the event with a family reunion dinner at their farm.

He was preceded in death by his parents, three sisters (Selma, Clara, Olga), and five brothers (Martin, Paul, Albert, Gerhard and David).

Funeral services will be held at 11:00am on June 28th at St. Stevens Catholic Church in Larimore with a viewing one hour prior. A visitation will be held Wednesday, June 27th from 5:00-7:00pm with a 7:00pm prayer service at the Bilden Funeral Home, Northwood, ND. Interment will be at Silent Hill Cemetery, rural Aneta.

To order memorial trees or send flowers to the family in memory of Carl Larsgaard, please visit our flower store.