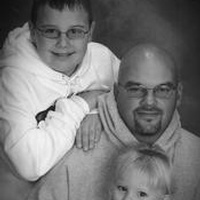 Bradley James Holweger passed away peacefully with his son, parents, sisters, brother-in-laws, nieces and nephews by his side on Wednesday, November 07, 2012 in the critical care unit of Sanford Medical Center in Fargo. Funeral services will be held Monday, November 12, 2012 at 2:00 pm at St. John Lutheran Church, Hatton ND. Visitation will be at the church Monday from noon until the time of services.
Brad was born in Northwood Deaconess Hospital at Northwood, ND to Dennis and Judy (Stimpert) Holweger on September 6, 1974 at 4:38 a.m. weighing in at 9 pounds 12 ounces.
He was baptized at Pleasantview Church, Emerado, ND and then was confirmed in the Green Meadow Church, Ada, MN. Brad served as a trustee and taught Sunday school there. He graduated from Northwood High School in 1993 and his favorite teacher was John Holien. Brad participated in wresting, football and track and won the Math Counts award. He didn't need a calculator as his mind was his calculator. He attended Northland Community Technical College, East Grand Forks, MN for auto body tech.
He was united in marriage to Michelle Miller on July 18, 1998.
He managed Ada Produce, Ada, MN for Chuck Gunnerson and was currently employed at Nokota Packers in Buxton, ND.
Brad loved to tinker around at the family farm. He would fix anything that was broken. Anything that wasn't broken, he figured out a way to make it better. He was 8 years old when he had his first crop of pumpkins and sold these to Millers in Emerado, ND. He said that the following year he was going to plant 10 packs of seeds and make $100 and he was going to hire someone to hoe them. He started driving trucks and tractors at age 10.
Brad's children, Zachary James (age 15) and Morgan Adeline (age 7) were the pride and joy of his life. He was so proud of them as excellent students, Zach as an athlete and Morgan her dancing. Morgan said her daddy died just because he worked too hard. Zach came up to the hospital on Tuesday and stayed with his dad until Brad left us on Wednesday morning. The love his children had for Brad will be his legacy.
He is survived by his parents, a son Zachary James, Ada, MN; a daughter Morgan Adeline, Detroit Lakes, MN; sisters Barb (Curtis) Huus, Hatton, ND, Beth (Jamie) Murphy, Epping, NH and Laura (Shane) Klindt, Parker, CO; nieces and nephews Sara Huus, Tiffany Huus, Spencer Huus; Alexandria Klindt, Brandon Klindt, Alex Murphy, Kelsey Murphy; great-niece Layken Olivia Marie Strand, special friend Rebecca Fischer and many aunts and uncles.
He was preceded in death by his grandparents Charles and Bertha Stimpert and Julius and Mae Holweger.
Brad's family would like to extend a special thank you to the doctors, nurses and staff for the excellent care and compassion that was given to Brad. The nursing staff cried with the family when it came time to say goodbye to Brad.

To order memorial trees or send flowers to the family in memory of Bradley Holweger, please visit our flower store.