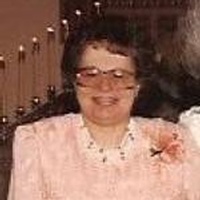 Funeral Services will be 2:00 pm, Monday, January 3, 2011 at the Northwood Evangelical Lutheran Church in Northwood with burial in the Northwood City Cemetery.

Visitation will be Sunday and the Bilden Funeral Home from 5:00 pm until 7:00 pm and one hour prior to services in the church.

Audrey Stamness was born June 4, 1935 at the Northwood, North Dakota the daughter of Andrew and Thonetta (Twenge) Stamness. She was raised there and graduated from Northwood High School in 1955. She then attended the North Dakota State School of Science in Wahpeton for two years. In 1965 she was united in marriage to Allan Knain in Northwood. They established their home there and Mr. Knain died in August of 1983. Audrey continued to make her home in Northwood until moving to Minot in 1997.

She was a member of the Northwood Evangelical Lutheran Church. Audrey enjoyed embroidering and gardening.

She was preceded in death by her parents; husband, Allan; step-sons, Eugene, Douglas and Wesley Knain and step-daughters, Gwendolyn Colbert and Mildred Hannem.

To order memorial trees or send flowers to the family in memory of Audrey Knain, please visit our flower store.