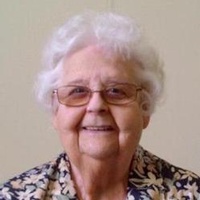 Ardyce Ione Lorenson was born February 29, 1932 at the Greenbush, MN Hospital. Ardyce was the eighth child of Peder and Agda (Wicklund) Lorenson and the first of their children to be born in a hospital. She was raised in Huss Township, Strathcona, MN.

Ardyce met Orphie M. Dahl at a Washington Lutheran Church Ice Cream Social in rural Northwood in the summer of 1951. They married on November 2, 1951 in Thief River Falls, MN. They made their home on a farm east of Northwood where they farmed and raised their family. In 1978 they moved into Northwood. Orphie passed away on November 4, 1997, two days after their 46th wedding anniversary.

Memorials are preferred to the Northwood ELCA Church Air Conditioning Fund or Hospice of the Red River Valley.

To order memorial trees or send flowers to the family in memory of Ardyce Dahl, please visit our flower store.