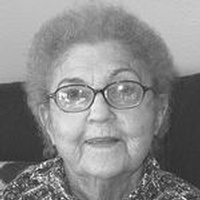 Visitation will be one hour prior to services in the church.

Alice M. Kleven was born October 9, 1921 in Grygla, Minnesota the daughter of Herman and Gertie (Berg) Kleven. She attended grade school in Hatton, North Dakota. During World War II Alice set out for Seattle, Washington in search of work, which she found with Sears-Roebuck Company. In Seattle, she married Roger Grimsley, Sr. who was serving the Navy. After the war, Alice and Roger moved to Florida. Alice then returned to Northwood in 1964 and was later married to Gwen Hagen. She worked for the Northwood Deaconess Health Center for 32 year before retiring in 1996.
Alice was an active member of Washington Lutheran Church. She enjoyed Bible study, quilting, bingo and most of all her family.
A special thank you to Ila Dahlen, Ruth Berge and Hank Sebecko for always being their her.

To order memorial trees or send flowers to the family in memory of Alice Hagen, please visit our flower store.