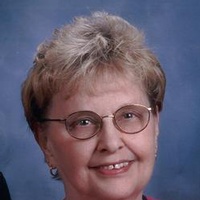 Alfa Nedberg was born on April 20, 1932 on the family farm near Aneta, ND. She was the fifth of eight children born to Ben and Emma (Running) Nedberg. Alfa was baptized and confirmed at West Union Lutheran Church, rural Northwood. She attended Loretta Township Central School and graduated from Aneta High School in 1950.

Alfa worked at the Johnson Store in Aneta until her marriage to Kenneth Haugen on May 18, 1952. Kenny and Alfa started farming near Finley ND. In 1955, they moved to the Nedberg farm where they continued to farm and raised their two children Ron and Mona.
Alfa was active in many community and church organizations. She was active in the Loretta Homemakers Club and the West Union Lutheran Church Ladies Aid. She drove school bus for Northwood Public School. Alfa helped on the farm with Kenny and Ron driving tractors, combines and trucks. She was devoted to her family and home. She was always sewing, cleaning and cooking. She was famous for her lefse and doughnuts. She was a second mom to many nephews who stayed on the farm during the summer months.

In 2003, Kenny passed away and in 2008, Alfa moved to the Eventide Lutheran Home in Moorhead.

To order memorial trees or send flowers to the family in memory of Alfa Haugen, please visit our flower store.