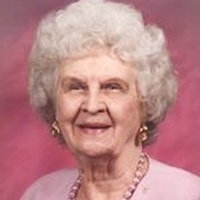 Adeline was born June 16, 1915 to Bennie and Ida Uglem on their farm in Loretta Township, ND. She was the 2nd oldest child of seven. She graduated from high school in Northwood. Adeline then received her nurses training for RN at Lutheran Deaconess Hospital in Minneapolis, MN.

Adeline married Eugene Leslie October 26, 1943 at Ogden, Utah. They then moved to Minneapolis, MN, where she worked as a Registered Nurse. They enjoyed many winters relaxing in Hawaii. Fargo became their home in 1999, where they were members of the Bethlehem Lutheran Church, and were active at the West Fargo Senior Citizens Center delivering "meals on wheels". Adeline moved to Northwood Deaconess Health Center in the summer of 2008.

She is preceded in death by her parents, sister, Bernice Bilden, and brothers, Parnell, Phil, Raymond, and Bert.

Internment will be at West Union Cemetery, rural Northwood.

The Bilden Funeral Home, Northwood is assisting the family with arrangements.

To order memorial trees or send flowers to the family in memory of Adeline Leslie, please visit our flower store.